Hello Neighbor
Shyranger.com is not an official representative or the developer of this application. Copyrighted materials belong to their respective owners. To download the app, you will get links to the Official Website and/or official digital markets.

Hello Neighbor is an adventure survival game. Your character is a kid who encountered strange things happening in his neighbor’s house. Now he wants to get in to investigate it and return not being caught by the neighbor. You can download Hello Neighbor for virtually any platform and enjoy it!

You play as a boy who has noticed his neighbor, a strangely terrifying mustached man, behave suspiciously. Curiosity leads you into his basement where something creepy is to be found. But the house itself is creepier than one could imagine. You explore it and try to avoid meeting its owner who learns each time you enter and prepares new traps for trespassers.

There are strange things to do to proceed, as each door is locked with a unique and illogical mechanism. You will have to think like a maniac – it’s no spoiler. In the end, you will unravel the mystery of his life, and it’s quite creepy too and tragic.

Its ways are so strange that it took an entire community to go through. The story, though, gave life to official sequels, fan fiction, and we’d like to see a movie.

It might seem a flaw in the beginning. Everything is exaggerated in here, from the neighbor’s terrifying face to colorful items and grim interiors of the house. But as it’s a first-person 3D game, and we look at it through the eye of a kid, it’s a natural way to show how strange and illogical the place is. Now it has become iconic, and both fan art and official sequels follow the same manner. As for sound, it matters too: it can help you detect the neighbor approaching and hide.

Quests and adventures are fun for the first time. When you already know what’s next, the fun expires. But Hello Neighbor makes this first time hard and full of surprises. The AI learns from your actions and doesn’t let you just repeat your actions as you replay: you have to find another way each time. The twisted mind of the neighbor builds a little world where Kafka meets Rube Goldberg, with strange mechanisms and illogical quests. It stimulated the community that used its hivemind to go through, and thus fostered the cult.

No surprises here, suddenly. If you play it on a mobile device, you have touch controls as a virtual gamepad. On consoles, it obeys the hardware gamepad. And on PC or Mac, there are keyboard and mouse controls. The buttons and combinations to look around, move, interact with objects, or hide are the most common, so you won’t have to learn them for more than a minute. 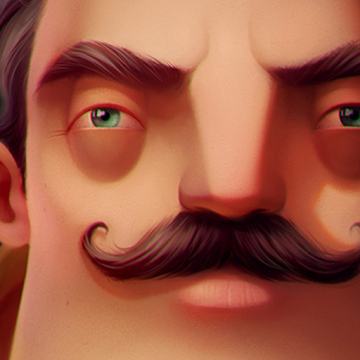 Hello Neighbor
29MB
Take a note. This app’s size is bigger than the average in this category